These brownie blondies are the perfect combination of blondies and brownies. They're gooey and fudgy with notes of brown sugar and caramel - you'll never have to choose between the two desserts again! Easy to make, 8 ingredients, and no mixer required!

Choosing between blondies and brownies is a regular dilemma for me. I crave the chocolatey fudgy taste of brownies but I also love the brown sugar, caramel flavor of blondies.

Why These Brownie Blondies Work

STEP ONE: Prepare an 8x8 inch square baking pan. Line it with parchment paper and leave some hanging over the sides to make it easier to remove the brownie blondies from the pan later. Preheat the oven to 350°F.

STEP TWO: To make the brownie batter, melt the butter in a large microwave safe bowl. Add in the brown sugar and white sugar, then whisk well until the mixture pulls away from the sides of the bowl like a paste.

STEP THREE: Whisk in the egg and vanilla extract. Whisk well, then add in the flour, cocoa powder, and salt. Whisk until just combined and set aside.

STEP FOUR: Make the blondie batter in a separate bowl following all the same steps as above, except the dry ingredients are just flour and salt (no cocoa powder).

STEP FIVE: Scoop around ¼ cup of the blondie batter into one corner of the 8x8 lined pan, then use a different measuring cup to scoop ¼ cup of brownie batter into the opposite corner. Alternate in a checker pattern (see step by step pictures below), always adding brownie on top of blondie and vice versa. The batters will seep together a little bit - that's okay.

STEP SIX: Take a knife and make a swirl in the top of the batter, starting at one end of the pan down to the other. Bake for 25-35 minutes or until a toothpick inserted in the middle of the brownie blondies comes out mostly clean with just a few wet crumbs (see picture below). Let them cool completely in the pan before slicing.

How can I tell when the brownie blondies are done?

It's tough to tell when brownies and blondies are done baking but here are the tell-tale signs:

1. The top has that shiny, crinkly look to it.
2. Jiggle the pan - the batter in the middle shouldn't shake!
3. Finally - always stick a toothpick in the centre of the brownie blondies! The toothpick should not be clean, but not covered in batter either. It should be mostly clean with a few wet crumbs.

Help! My brownie blondies are too gooey or liquid!

Unfortunately, you probably under-baked them. Or, you sliced into them too early. The brownie blondies continue to set as they cool, so slicing into them when they are warm will create a gooey mess. You can try to salvage them by putting them in the fridge to firm up.

Can I make these brownie blondies in a 9x13 pan?

Yep! Just double the recipe and keep a close eye on them - I would start checking on them at around 20-25 minutes, as they will bake faster.

Why can't I see the blondies anymore?

You likely mixed the batters together too much. The pattern of the brownie blondies will look slightly different every time these are made as it depends on the way the batters naturally blend together.

Why didn't I get a crackly top on my brownie blondies?

In order to get that crackly top, you need to do two things:
1. Vigorously whisk the butter and sugars together until a paste forms that pulls away from the sides of the bowl
2. Whisk the eggs into the batter well.

If you add the ingredients to the bowl out of order or skip the above steps, you might not get the crackly top.

The brownie blondies should be stored un-sliced in the baking pan covered tightly with tin foil. They will stay fresh for up to 5 days (if you can make them last that long!).

If they've already been sliced, you can store them in an air tight container at room temperature.

I don't recommend freezing these bars! 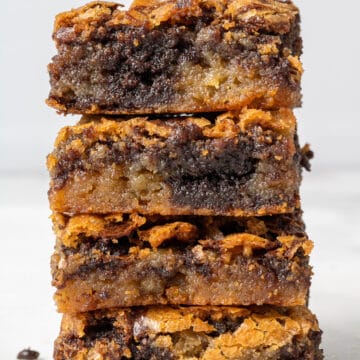 PLEASE NOTE: I highly recommend using a kitchen scale to weigh your dry ingredients. Metric measurements are found above under the "Metric" tab. COCOA POWDER: I recommend using dutch processed cocoa powder, but you can use natural if that's what you have. MEASURING FLOUR and COCOA POWDER: Either measure your flour using a kitchen scale or use the proper scooping method: fluff the flour in the bag/container with a fork then use a spoon to scoop the flour into the measuring cup, then run the back of a knife along the top of the cup to even it out. Do the same for the cocoa powder. BAKING TIME: This will vary depending on your oven. If using a glass baking dish instead of aluminium, the brownie blondies will take longer to bake as well. MARBLING: Your brownie blondies will likely have a different pattern than the ones in the photos, as it all depends how the batters decide to blend. Each time I make these the pattern is slightly different! The most important thing is to try not to mix the batters together too much, so that the blondies don't get lost in the brownies. MEASURING CUPS: Use one measuring cup to scoop the brownie batter into the pan, and another measuring cup to scoop the blondie batter in. Using the same cup will cause the batters to mix together too much. Storage Instructions: Store un-sliced in the pan, covered tightly with tinfoil 3-4 days. If they've already been sliced, you can store them at room temperature in an airtight container.  Doubling Instructions: To double the recipe, double all ingredients and bake the brownie blondies in a 9x13 pan for 20-35 minutes.

The calorie information provided for this recipe is an estimate. The accuracy of the calories listed is not guaranteed.