The only word I can use to describe these dairy free brownies is divine. They truly are the best fudgy brownies ever. They're rich, gooey, chocolatey, and have the perfect crinkle top. The best part: they're so easy to make and require only 8 ingredients!

I promise you I'm not exaggerating when I say a pan of these brownies doesn't last a full 24 hours in my house (and there are only 2 of us!). So I did not take the naming process for these brownies lightly. That's why when I named them the best fudgy brownies, it's because seriously, they are. I tested this recipe sooo many times, and let me tell you, the result is heavenly.

What makes these dairy free brownies so fudgy?

It's actually really cool how many different ways there are to make brownies. Some use oil, others don't. Some use melted chocolate, some use cocoa powder, others use both. Some recipes call for 4 eggs, while others call for only 2.

So my goal was to create a recipe for dairy free brownies that delivered soft, fudgy texture and rich chocolate flavour and I wanted it to be as easy as possible. So here's how I did it:

These brownies get their chocolate flavour fully from cocoa powder instead of melted chocolate for a few reasons.

2. The second reason is because chocolate bars have a high amount of other ingredients in them like sugar and cocoa butter, but I wanted these brownies to be pure chocolatey goodness. Cocoa powder has no unnecessary ingredients, so it delivers a rich, bold chocolate flavour.

3. The final reason for using all cocoa powder is that brownies made with cocoa powder stay soft. The higher cocoa butter content in melted chocolate makes brownies get a bit harder and tougher as they cool. Using all cocoa powder means you'll have that velvety, fudgy texture for days after the brownies are baked (if you can make them last that long without devouring every last one 🙂 ).

Another thing I've always disliked about making brownies is having to use up 4 eggs for a tiny pan of brownies. One of the reasons these dairy free brownies are so dense, velvety, and fudgy is because they only have 2 eggs. Less eggs means instead of having a fluffy cakey brownie that rises, you have a more chewy, dense brownie.

How do you make the best fudgy brownies from scratch?

Since these brownies require no melted chocolate, they take under 10 minutes to prep. This recipe seriously could not be any easier!

The first step is to prepare an 8x8 square baking pan by lining it with parchment paper. Cut the parchment paper into two pieces that will fit into the pan (or you can use one piece - but just be sure that the two sides without parchment are well greased with cooking spray). Leave some parchment paper hanging over the sides of the pan so that you can easily remove the brownies later.

Next, add both the sugars to the bowl with the melted butter and use a whisk to mix them together. You'll want to whisk quickly until the mixture resembles a paste, and pulls away clean and easily from the sides of the bowl. Add in the eggs and vanilla extract and mix again until incorporated.

Finally, add in all the dry ingredients and continue to stir until they are just incorporated. Now this is important! One of the keys in making sure the brownies are fudgy and soft is being careful not to over-mix (more on that later in this post).

Pour the batter into the prepared baking pan and spread it evenly throughout the pan with a spatula then bake for 30-40 minutes. Knowing how to tell when brownies are cooked can be tricky, so I've outlined my tips for perfectly baked dairy free brownies below.

Use cocoa powder that is dark in colour

This is a personal preference because I really love chocolate, but I find that I get a richer chocolate flavour from cocoa that is darker in colour. I use this one. I've tried using others but have found that they often don't deliver the deep chocolate flavour I crave. It isn't any sort of specialty dark or black cocoa, but so far that's the best one I've found. You can tell the difference in colour as soon as you open the container.

The texture of brownies can be largely affected by how much you mix the batter. Brownies are one of the few desserts that I don't use my standing mixer for, because I want to be really careful about how much I'm mixing them. When you add in the dry ingredients, use a whisk to mix the brownies just until you don't see anymore dry ingredients, then stop.

I will admit, it is really hard to tell when brownies are done! With a lot of baked goods, you can simply use a toothpick to test it and when it comes out clean, then you know. Pretty straight-forward. For brownies, it's a little more complicated but the steps below will hopefully make these fool proof!

When you take the brownies out of the oven, be sure to let them cool completely before cutting out pieces. Because the brownies are super fudgy, they need some time to set and firm up before you can slice them. Otherwise you might just have gooey mess on your hands!

How do you know when brownies are done baking?

As we've discussed, over-baking your brownies will lead to dry, cakey brownies with hard edges. In order to avoid that, here are a few tell-tale signs that the brownies are ready:

How to store fudgy brownies

These brownies will last 3-4 days at room temperature in an airtight container. You can also store them un-sliced in the baking pan covered in plastic or a reusable wrap. 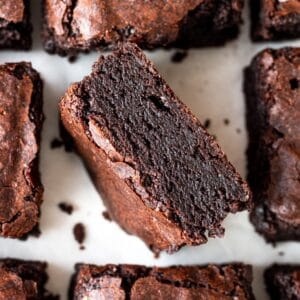 BAKING TIME: This will vary depending on your oven. If using a glass baking dish instead of aluminium, the brownies will take longer to bake as well. BUTTER WEIGHT: Please note that this measurement has been calculated using vegan butter. Weight of vegan butter may vary between brands and weight will be differ for regular butter.   Storage Instructions: Store at room temperature in an airtight container, or un-sliced in the pan. If leaving them in the pan, be sure to cover in plastic wrap or a reusable wrap. They will last around 3-5 days.
Keyword Dairy Free