Dairy free whipping cream is so delicious and makes a perfect vegan substitute for traditional whipped cream. It's incredibly easy to whip up and only requires 3 ingredients or less!

This is a basic recipe but it is so versatile. Whether you're vegan, dairy free, or just like whipped cream - this dairy free whipping makes everyone happy. It's made using canned coconut cream so it has a slight coconut flavour, but it's very subtle!

I use this dairy free whipped cream as an ingredient in so many recipes, so I wanted to create a very basic, step-by-step guide to teach you how to make it!

There are two ways to use this coconut whipped cream. The first way is to add icing sugar and vanilla, then use it for topping desserts like cakes, pancakes, and brownies.

The second way is as a substitute ingredient in recipes that call for whipped cream or heavy cream. If you omit the icing sugar, the recipe becomes a plant based whipping cream that can be used to make dairy free homemade ice cream and cheesecake!

If you're making this whipped cream to use as a base ingredient in a recipe, you'll want to make sure to omit the icing sugar and vanilla. Those ingredients are likely already in the recipe!

This homemade vegan whipped cream is SO easy, but the trickiest part is remembering to refrigerate the canned coconut milk!

Canned coconut milk must be chilled for at least 8 hours or overnight so that the coconut cream can harden and separate from the coconut water in the can. The whipped cream absolutely won’t work if you skip this step!

10 minutes before you start making the whipped cream, place a large mixing bowl in the freezer to chill.

Remove the bowl from the freezer and the can of coconut milk from the fridge (careful not to tip the cans or shake them up). Scoop the hard coconut cream out into your mixing bowl, leaving behind the liquid (you can use it for smoothies later!).

Begin whipping the coconut cream on medium-high speed until smooth. You can use a standing mixer or a handheld mixer for this! Beat for around 1 minute, then add in the powdered sugar and vanilla.

Continue whipping the cream until stiff peaks form. This can take around 5 minutes or more, and when it’s ready it should be the consistency of whipped cream.

I've made this dairy free whipped cream soooo many times, so I've put together a few tips that I've found helpful:

Although the base of this dairy free whipping cream is coconut milk, it is important to note that this is not the same as coconut milk in a carton that you would find next to the almond and oat milk at the grocery store.

Canned coconut milk acts as a substitute for heavy cream in whipped cream, so you want the highest fat content possible. Here are a few things to look for when choosing canned coconut milk:

Some stores also sell coconut cream in a can, which works too! You should still chill the can overnight though!

Help! My whipped cream is too liquid!

If you followed all the tips and instructions in this post but then open the can to find that there's hardly any hardened cream in there - you may have just gotten unlucky with the can 🙁 Some brands of canned coconut milk won't harden because they don't have enough fat in them, but there can sometimes be variance even with a tried-and-true brand.

Unfortunately, I'm sorry to tell you this, but you may have to just start over, or try another brand. This is the one I use. It is a bit of a trial and error game but this one always works for me.

Once you find a brand that works, you can try to keep two cans in the fridge at all times so that you have a backup in case you get a dud can!

CAN I substitute the COCONUT MILK WITH OTHER NON-DAIRY MILK?

Unfortunately, no. The canned coconut milk can’t be replaced with other non-dairy milk from a carton because it won’t whip up into the consistency of whipped cream.

How can I use dairy free whipping cream?

Dairy free whipping cream can be used in SO many things! Use it to top cake, brownies, hot chocolate, pancakes, or as a key base in vegan or dairy free cheesecakes and homemade no-churn vegan ice creams!

You can start here:

Or use it as a topping on one of these: 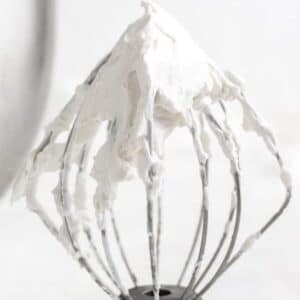 Calories: 180kcal
Tried this recipe?Let us know how it was!
« Ginger Sandwich Cookies with Spiced Buttercream and Caramel Filling
Vegan Red Velvet Cookies »