These no bake lemon blueberry cheesecake bars are one of my proudest dairy free recipes to date. The dairy free cheesecake filling is unbelievably creamy, smooth, lemon-ey, and filled with juicy blueberries. It's all on top of a buttery graham cracker crust that is seriously out of this world. Honestly, people probably won't even believe you when you tell them these bars are dairy free!

If you don't eat dairy, I bet you thought cheesecake was something you'd just never be able to enjoy again, right? Well, I'm happy to report that that's not the case. This recipe is going to make all your dairy free cheesecake dreams come true!

How can a cheesecake be dairy free?

What is a no bake cheesecake?

Well, it's exactly what it sounds like. There is no oven required for no bake cheesecakes. While a traditional cheesecake is made with eggs, the no bake version is made with cream cheese, whipped/heavy cream, and in some cases, gelatin. It is then placed in the fridge for a few hours/overnight to set. I love no bake cheesecakes because they are creamier and have a more mousse-like consistency.

For these dairy free lemon blueberry cheesecake bars, we use 3 key ingredients:

In a blender or food processor, grind up 30 square graham crackers until they are very fine, almost a flour-like consistency. Transfer to a medium bowl and add in the granulated sugar and melted butter, then whisk until combined.

Transfer the mixture into an 8x8 square baking pan (lined with parchment paper) and pat it down in an even layer on the bottom, making it as flat as possible. I like to use the back of a measuring cup to pat it down firmly. The pan now goes into the freezer so that the crust can firm up while we make the filling.

To make the filling, take the canned coconut milk. out of the fridge without shaking it. The coconut milk needs to be chilled for 8 hours first, so that the coconut cream hardens and separates from the coconut water. If it isn't chilled for long enough, the whipped cream won't work.

Scoop out the thick creamy layer of coconut cream, leaving the liquid behind (tip: freeze leftover liquid in an ice cube tray for smoothies!). In a chilled mixing bowl, begin whipping the coconut cream on high speed until it stiffens and peaks start to form. It should be the consistency of whipped cream.

Transfer the whipped cream into a small container and put it in the fridge while you prepare the rest of the filling. Next, make the gelatin by adding the gelatin powder to water and microwaving it for 20-30 seconds. It should be hot and liquid.

In the same bowl that you whipped the cream in, add the cream cheese and whip until smooth and creamy. Add in the vanilla, powdered sugar, lemon juice, and lemon zest and mix until all are combined. Then fold in the whip cream until it's just combined (careful not to over-fold), followed by the blueberries (fresh or frozen is fine!).

Pour the filling into the baking pan over the graham cracker crust and let it set in the fridge for 8 hours/overnight. It should be shiny on top once it is set.

Once the bars have set, slice them using a very sharp knife, in one swift motion. Wipe down the knife with a damp cloth or paper towel in between each cut.

Store the cheesecake bars in covered container in the fridge, and when serving, I recommend letting them soften for around 10-15 minutes at room temperature (they get creamier as they sit out of the fridge).

So as I mentioned above, these bars contain gelatin and graham crackers, which are unfortunately not vegan. However, this recipe makes an AMAZING lemon blueberry cheesecake mousse if you want to make it vegan. If you're into something a bit more mousse-like, I absolutely recommend it, so here are the substitutions: 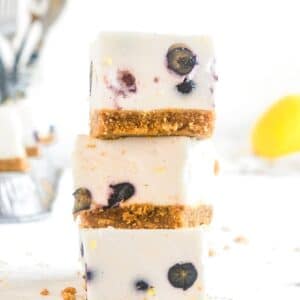 CHILLING THE COCONUT MILK: The coconut milk MUST be chilled for 7-8 hours overnight before you whip it, or else it will be too liquid. COCONUT WHIPPING CREAM: This recipe will also work with store-bought coconut whipped cream from a tub (not from a can).

Calories: 250kcal
Tried this recipe?Let us know how it was!
« Apple Cake Loaf
Chocolate Coconut Cupcakes »