The easy apple loaf cake is soft, moist, and filled with delicious apple chunks, and the best part is: it's topped with a cinnamon cream cheese glaze that you would seriously NEVER guess is dairy free. This apple loaf is the perfect level of sweetness, with a beautiful blend of cinnamon and apple flavours that will actually make you look forward to Fall!

Okay, so developing a new recipe typically involves 4, 5, 6 (or more!) test batches. This means that typically, by the time I've nailed the final recipe, I have eaten sooooo much of it that I don't make that recipe again for at least a few weeks. But this one, wow. Not only am I eating a slice of it as a type this post, but I also have another loaf in the oven too. It is THAT good.

What kind of apples should I use for the apple loaf?

This one is easy: pretty much whatever ones you have! This loaf isn't fussy, although my recommendation is to use Gala apples. But McIntosh, Pink Lady, or any other red apple will work.

The only ones I would not recommend are Red Delicious, as they have more of a mushy texture and the apple pieces might get lost in the loaf. Red Delicious apples also don't have as strong of an apple flavour (although I may be biased, as Red Delicious are not my favourite!).

How to make easy apple loaf

The great thing about this recipe is that it's fairly straightforward. The recipe calls for 1 and a ½ medium sized apples (around 1 ½ cups), which will be chopped into small cube shaped pieces.

½ cup of the apple slices are blended with the almond milk in either a blender or a food processor to really get that apple flavour incorporated into the loaf. The rest of the apples are folded into the batter later.

To make the batter, cream together butter and sugar until fluffy, then add in egg and vanilla. Pour in the blended apple mixture and mix it in. Then add the dry ingredients and mix until just combined. Finally, fold in the apple chunks and pour the batter into a 9x5 baking pan.

The loaf should be baked at 350F for between 45-55 minutes. Since all ovens are different, I recommend starting to check the loaf around 45 minutes by inserting a toothpick in the center of the loaf. If it comes out clean, its done!

If you notice the top of the loaf start to brown too much before it's ready, take it out of the oven and gently cover the top of the pan in tinfoil, then continue to bake for the remaining time. The browning will really depend on the oven (in my oven, even after 55 minutes of baking, the top isn't over-browned).

While the loaf cools, make the glaze. Let the loaf cool for around 30 minutes before pouring the glaze on top. This glaze is optional of course, but highly recommended! The cinnamon cream cheese glaze on this apple loaf is absolutely heavenly.

Okay, I could seriously eat this stuff with a spoon. It tastes EXACTLY like a cream cheese glaze made with dairy. Seriously, I challenge you to share it with your friends and see if they know its dairy free.

How to store Apple loaf with Cinnamon Cream Cheese glaze

This loaf can be stored at room temperature for up to 5 days (though it has yet to last that long in my house). You can also slice the apple loaf (unglazed) and freeze it to glaze and enjoy later. 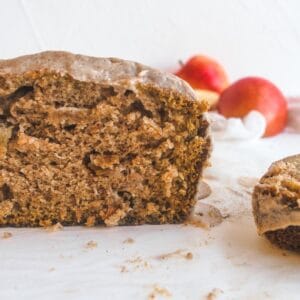 Keyword Breakfast, Brunch, Dairy Free
Tried this recipe?Let us know how it was!