These raspberry cupcakes are soft, fluffy, and filled with bursts of raspberry flavor. They're topped with a creamy raspberry frosting and perfect for any occasion!

This recipe was originally published in January, 2021. It has been updated with new photos, detailed instructions, and a step-by-step-video.

I love cupcakes! You can never go wrong with a classic Vanilla Cupcake or if I'm craving chocolate, I love making Chocolate Orange Cupcakes.

But once in a while, when I'm feeling fancy and craving fresh, summery flavors, raspberry cupcakes just hit the spot.

I love these raspberry cupcakes because they can be made for so many occasions! They're perfect for Valentine's Day, Mother's Day, baby showers, bridal showers, birthdays, Fourth of July...even Christmas!

Why You'll Love These Raspberry Cupcakes

I don't recommend any substitutions to most of the ingredients in this recipe, as it will affect the texture of the raspberry cupcakes, but here are a few notes about the ingredients:

Note: Full ingredient measurements and instructions can be found in the recipe card at the bottom of this page.

Step One: Preheat the oven to 350°F, then combine the flour, baking powder, and salt in a bowl and set it aside for later. In the bowl of a standing mixer or handheld mixer, beat the butter and sugar together until light in color and fluffy (1-2 minutes).

Step Two: Beat in the two eggs and egg white then add in the vanilla extract and the milk.

Step Three: Add the dry ingredients into the batter and mix it all together - careful not to overmix! The batter will be thick.

Step Four: Remove the raspberries from the freezer and toss them with 1 tablespoon of flour in a small bowl. This step helps ensure the raspberries don't sink to the bottom of the cupcakes.

Step Five: Scoop the batter into the cupcake liners until they are two thirds full, then gently push 3-5 raspberries into each one. (Alternatively, you can fold them in very gently so that the color doesn't bleed into the cupcake batter).

Step Six: Bake for 16-22 minutes. You'll know they're ready when a toothpick inserted into the middle of a cupcake comes out completely clean! Let the cupcakes cool completely while you make the buttercream.

Step Seven: Mix the thawed or fresh raspberries in a blender or food processor until they become a puree.

Step Eight: Add the raspberry puree to a small saucepan and bring it to a boil on medium heat.

Step Nine: Reduce the heat to low/simmer and stir every few minutes until there is about half as much raspberry puree as there was in the beginning. This could take anywhere from 5-15 minutes.

Step Eleven: While the puree is cooling, beat the butter and vegetable shortening in a mixing bowl until they're fully combined.

Step Twelve: Beat in the puree, then add in the powdered sugar a little bit at a time. Continue adding powdered sugar until the buttercream reaches your desired consistency.

Can I use dehydrated raspberries?

Yes! To make the buttercream with dehydrated raspberries, there are less steps involved so it's actually quite easy! Place around 1 cup of freeze-dried raspberries into a blender or food processor and grind them up into a powder (if there are a few small chunks that's okay).

Why do I have to use an egg white instead of a whole egg?

Egg yolks add more fat to the cupcakes, which gives them a heavier texture instead of that light and fluffy texture that we want in a cupcake!

Can I skip the raspberry buttercream?

Sure! These cupcakes also go great with vanilla buttercream or coconut whipped cream! You can even decorate them with fresh raspberries!

Why is my buttercream runny?

The frosted cupcakes can be stored in an airtight container at room temperature for up to 3 days. Storing the cupcakes in the fridge will dry them out so I don't recommend it.

These raspberry cupcakes can be frozen for up to 2 months. Wrap the unfrosted cupcakes individually in plastic wrap then put them all in an airtight freezer bag.

To defrost, just remove them from the freezer, unwrap each one and place them on a cooling rack at room temperature.

The raspberry buttercream can be frozen in an airtight container as well - then thaw it in the refrigerator and mix it with your beater again to bring back the fluffiness! 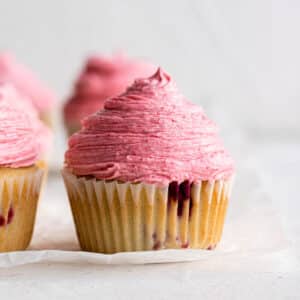 MEASURING FLOUR: Properly measure your flour using the scoop and level method or a kitchen scale. SHORTENING: if you are making these cupcakes using regular (not dairy free) butter, you can replace the shortening with equal amount of butter. If you are making the buttercream using a soft dairy free butter, the shortening will help the buttercream to hold its shape. Raspberries: IN THE CUPCAKE BATTER - For the cupcake batter, frozen raspberries works best, but you can use fresh raspberries and put them in the freezer until they are frozen solid before making the cupcakes! IN THE BUTTERCREAM - For the buttercream, you'll want to use fresh raspberries or frozen raspberries that have been thawed so that they are easier to puree in the blender/food processor! DEHYDRATED/FREEZE DRIED RASPBERRIES: To make the buttercream with dehydrated raspberries, there are less steps involved so it's actually quite easy! Place around 1 cup of freeze-dried raspberries into a blender or food processor and grind them up into a powder (if there are a few small chunks that's okay). REFRIGERATING THE BUTTERCREAM: To make the buttercream easier to work with, refrigerate it for 20 minutes at least, or even for a few hours. This will really help firm it up before piping. Storage and Freezing Instructions: The frosted cupcakes can be stored in an airtight container at room temperature for up to 3 days. To freeze, wrap the unfrosted cupcakes individually in plastic wrap then put them all in an airtight freezer bag. To defrost, unwrap each cupcake and place on a cooling rack at room temperature. Buttercream can be frozen for up to 2 months in an airtight container. Before using, let it thaw in the fridge for a couple of hours, then stir to fluff it up.

The calorie information provided for this recipe is an estimate. The accuracy of the calories listed is not guaranteed.