This pumpkin sheet cake is the perfect fall dessert for the holidays. The cake is soft, fluffy, and full of fall flavours with a spiced cream cheese frosting! This cake is a major crowd-pleaser, even among people who don't like pumpkin. Move over pumpkin pie, fall sheet cakes are where it's at!

This easy pumpkin cake is just a perfect dessert to serve at the holidays. It is way easier to whip up than pumpkin pie, and doesn't have that strong pumpkin flavour that pumpkin pie does!

Actually, if I'm being completely honest, pumpkin isn't even my favourite flavour. But this cake, it is so good, I will eat it straight out of the pan with a fork. You can make this cake using regular dairy ingredients or make it completely dairy free!

How do you make pumpkin cake from scratch?

There's just something about sheet cakes. I personally love them and find that they deliver the same indulgent experience as a layer cake with a quarter of the effort. This cake is so easy, it's almost too good to be true.

Begin by greasing the sides of a 9x13 rectangular sheet pan, then line the bottom of the pan with a piece of parchment paper so the cake can be easily taken out of the pan.

Whisk together all the dry ingredients and set them aside for later. Then, in the bowl of a standing mixer with the paddle attachment, beat the vegan butter and sugars until just combined. Add in the eggs, maple syrup, and vanilla and mix again. Add in the pumpkin puree and mix until incorporated.

Slowly add in the dry ingredients and continue to mix until combined. The batter will be fairly thick. Pour the batter into the sheet pan and use a spatula to spread it into an even layer in the pan. Bake the cake until a toothpick inserted in the middle comes out clean.

Let the cake cool completely while you make the cream cheese frosting.

How do you make spiced cheese frosting from scratch?

In the bowl of a standing mixer with the paddle attachment, mix together the room temperature cream cheese and the vegan butter until smooth with no clumps. Add in the vanilla and mix again.

Add in the cinnamon followed by the powdered sugar, ¼ cup at a time, scraping the sides of the bowl as you go.

Now is the best part - assembling the pumpkin sheet cake! Scoop a large dollop of frosting on top of the cake then spread it around using an offset spatula or regular spatula. Sprinkle a bit of cinnamon on top and voila! Your friends and family will be blown away!

What if I can't find dairy free cream cheese?

I know that in some places, it may be difficult to find dairy free cream cheese, or it might be on the pricier side. But the beauty of this easy pumpkin cake is that it actually is very versatile. If dairy free cream cheese isn't accessible to you, this cake pairs beautifully with a cinnamon buttercream as well.

I tend to keep multiple flavours of buttercream stored in my freezer at all times (learn how to freeze buttercream here). So I like to test different frosting options when I am developing a new cake or cupcake recipe, and the cinnamon buttercream is a perfect match for this pumpkin sheet cake.

To make cinnamon buttercream, ditch the coconut in this buttercream recipe, and add in 1 tsp. of cinnamon.

Can I make this pumpkin sheet cake using dairy ingredients?

Absolutely! This cake can easily be made using regular (not vegan) butter and the frosting can be made with regular cream cheese. Simply swap both out at equal ratios!

Is there a difference between pumpkin puree and pumpkin pie filling?

Yes! It is really easy to get confused between these two, especially because the labels on the cans often look really similar. Pumpkin puree is pumpkin that has been cooked and then pureed, with no additional sweeteners or spices.

Pumpkin pie filling, on the other hand, is pumpkin puree with sweeteners and spices added into it. I strongly advise against swapping the two in this recipe, as the cake will turn out overly sweetened and overly spiced.

What can I use if I don't have pumpkin pie spice?

This recipe uses pumpkin pie spice, which is a super convenient spice mix! It’s a blend of cinnamon, ground cloves, allspice, nutmeg, and ginger and it makes fall sheet cakes (or any other fall desserts) taste wonderful. The beauty of pumpkin pie spice is that its 5 spices in one.

How to store pumpkin sheet cake 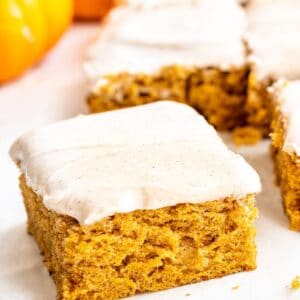